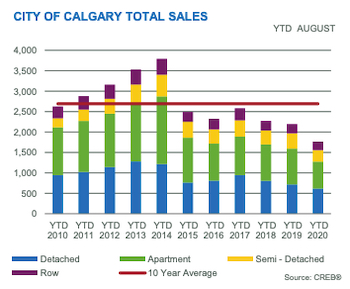 Great news, if your rate is variable, your rate is predicated on prime, which is set currently at 2.45%. You either have a variable rate of prime (2.45%) minus or plus a spread.... 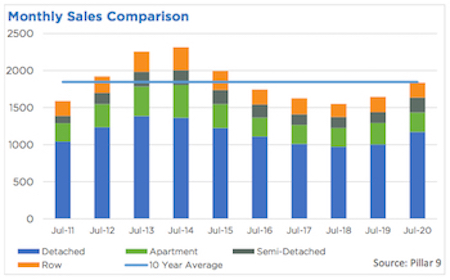 "There have been improvements relative to the lowest sales levels caused by COVID-19, but it is too early to say things are shifting back to pre-pandemic levels," said CREB® chief economist Ann-Marie Lurie.

"We are still facing record-high unemployment rates, significant government aid, and uncertainty throughout the business community....

Total of 3,335 new listings in June, which was a six percent increase over...

The new rules will lower the debt allowed for a homeowner to take on. So essentially you will qualify...

The drop in inventory in the higher price ranges has not been enough in comparison to the decrease in sales. The months of supply is higher than the already elevated...

With social distancing measures in place, the housing market is adjusting to the effects of COVID-19.

April sales were 573 units, a decrease of 63 percent over last year.

"The decline in home sales does not come as a surprise. The combined impact of COVID-19 and the situation in the energy sector is causing housing demand to fall," said CREB® chief economist Ann-Marie Lurie.

"Demand is also falling faster than supply. This is keeping the market in buyers' territory and weighing on prices."

Eased sales activity seen in all price ranges, but the largest decreases occurred in homes priced over $600,000.

With more of the sales seen in the lower price ranges, the average price decrease was higher than eight percent. Average prices for homes are also declining, indicated by the benchmark price, that dropped by almost two percent in comparison to last year.

COVID-19 weighing against the housing market

Following a solid start to 2020, economic circumstances have dramatically shifted, as COVID-19 is affecting all aspects of society.

The economic impact is across many industries, including the housing market.

Sales activity for March began the month strong only quickly turned, as concerns regarding the spread of COVID-19 brought about social distancing measures, which caused a substantial impact on businesses and employment.

"This is an unprecedented time with a significant amount of uncertainty coming from both the wide impact of the pandemic and dramatic shift in the energy sector. It is not a surprise to see these concerns also weigh on the housing market," said CREB® chief economist Ann-Marie Lurie.

By the end of March, sales activity had fallen 11 percent compared to last year. This is 37 percent lower than long-term averages. The drop in sales pushed March levels to the lowest recorded since 1995.

The unadjusted benchmark price overall for February was $416,900. Comparable to last month, yet about one percent less than levels last year. Overall, prices continue at almost 11...

January unadjusted benchmark prices citywide were $417,100, which is moderately lower than the prior month and almost one percent less than levels last...