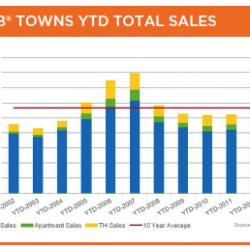 In keeping with the trend from the past several months, Calgary residential sales enjoyed higher than expected growth during the month of August. With a total of 1,725 residential sales, the figures represent a 10 percent increase when compared to August of last year. On the other hand, while Calgary sales have remained strong throughout the month of August, they have slowed down when compared to the previous five months.

While Calgary sales have experienced a bit of a slump when compared to previous months, CREB President Bob Jablonski attributes this to the fact that the number of new listings on the single-family market has slowed down. In fact, new listings dropped by 13 percent in August, reaching a total of just 2,585 units. When compared to August of last year, the number of new listings is still down by four percent. With fewer homes to choose from, many buyers are either waiting to buy a home, are purchasing new homes or condos, or are looking for homes in the surrounding towns. With new listings in surrounding towns increasing by nearly 10 percent since the beginning of the year, there are plenty of options to select from.

According to Jablonski, sales in surrounding towns are likely to continue to grow due to affordable prices, lifestyle factors, and availability of options. In general, Jablonski reports that the area has enjoyed sales activity that is "comparable to peak sales activity."

When comparing year-over-year data, new listings in Calgary fell by 14 percent. Meanwhile, the total number of sales totaled 1,169 in August 2012, representing a six percent increase when compared to 2011. Due to demand outpacing supply, the single-family market experienced a significant drop in inventory. On the other hand, the drop in sales helped to ease the pressure that had been building on the market.

Despite the decrease in sales growth, experts predict that the upward price pressure on single-family homes is not likely to let up until the fall. In August, the benchmark price for a single-family home reached $432,600, representing an 8 percent increase when compared to August of the previous year. When compared to previous months, the prices have leveled off. Furthermore, they still remain nearly $20,000 below the peak levels that were recorded in July 2007.

As might be expected, both the condominium apartment and townhouse markets have experienced year-over-year growth that has actually outpaced the single-family market. Sales in the apartment market have improved by nearly 10 percent when compared to 2011, while the number of new listings has remained level. Meanwhile, the benchmark price for condominium apartments increased by 3.6 percent to $248,700 while townhouse condominiums increased by 2.5 percent to $278,200.

The 2013-2017 Suburban Residential Growth report has predicted that Calgary's population is going to grow by almost 120,000 ...